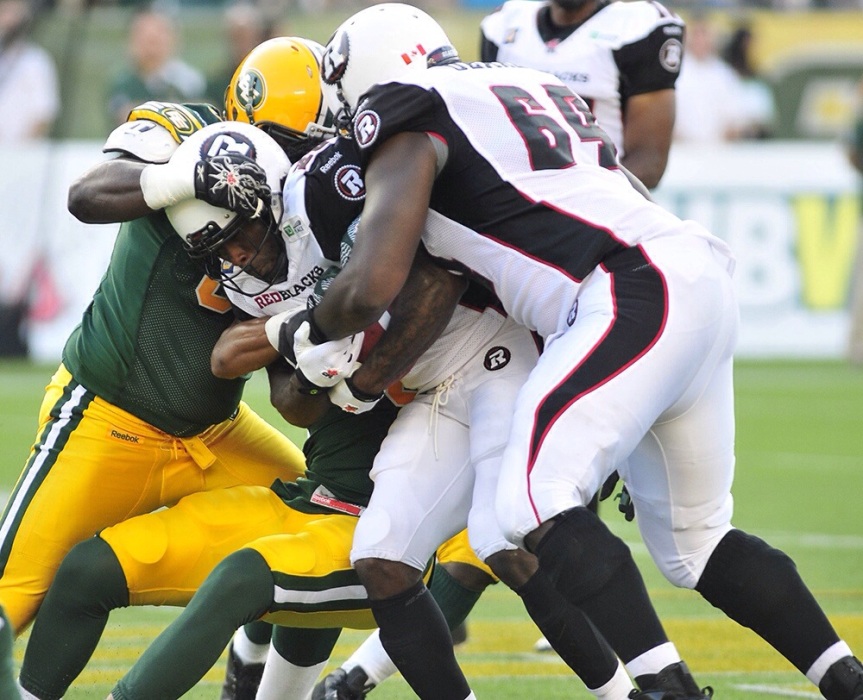 On Friday night, the Ottawa Redblacks attempted to be the first Ottawa team to get a win at Commonwealth Stadium since August 26th, 1983 and to end a streak of 18 straight losses (spanning the Rough Riders and Renegades) in Edmonton.

– No TSN pre-game show to speak of, due to a sloppy, flag-filled affair (that seemingly dragged on forever) taking place in Montreal between the Als and the Bombers

– Eskimo QB Mike Reilly goes for the throat on the Esks’ first play, launching a deep bomb but overthrowing an open Fred Stamps

It’s a punt off in Edmonton.

– After finally stringing together a few first downs thanks to a Walker shovel pass and a Matt Carter (#85) catch, the Redblacks’ drive stalls 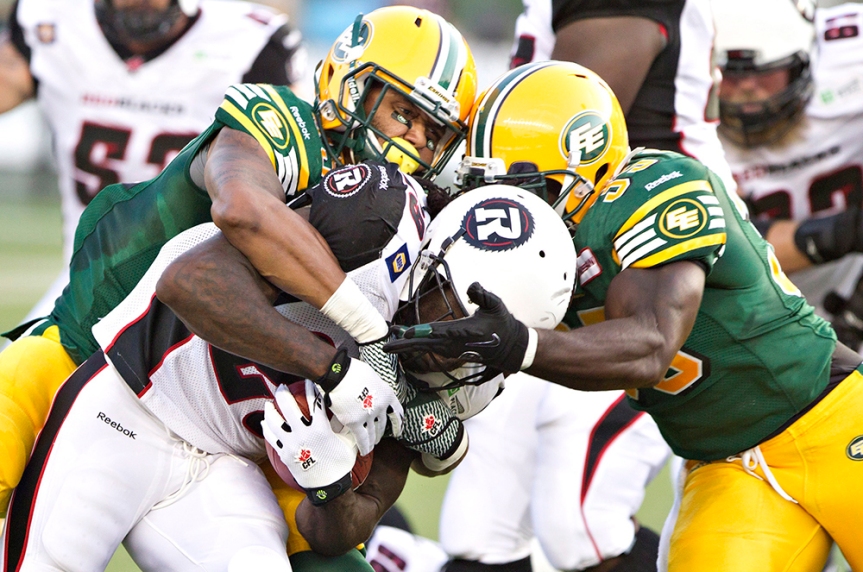 – For the 2nd week in a row the Redblacks try to run a fake field goal with backup QB Thomas DeMarco (#17) but are thwarted by a timely Eskimo timeout.

– Teams continue to trade two and outs to start the 2nd

– Redblacks returner Jamill Smith (#15) will have a restless night after he finds a lane, has nothing but open field in front of him but steps out of bounds on the sideline

Walker being shot out of a canon + Delahunt making a hell of a block = a #REDBLACKS TD! 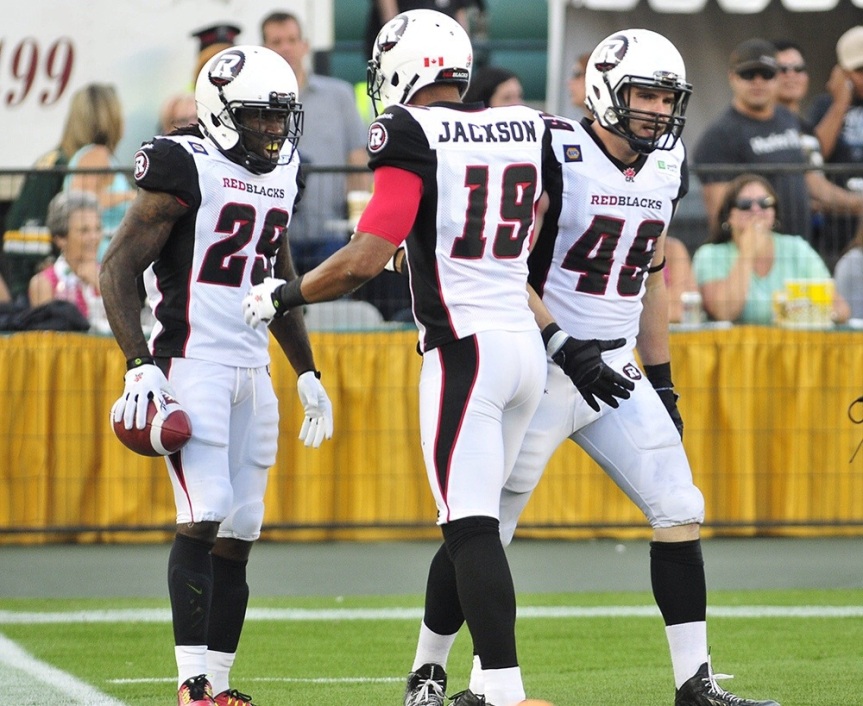 Walker celebrating his 3rd TD of the year

– 7-2 Redblacks over the Esks at the half

– Eskimos make it look easy as they march down the field and score on their opening possession; Adarius Bowman hauls in a 41 yard pass and dances around safety Eric Fraser (#7) to score. Adding insult to injury the Redblacks are flagged for roughing the passer which is tacked onto the kick off, which Grant boots through the end zone for a single.

– Instead of following conventional wisdom and conceding a safety, the Esks decide to punt, which Smith fields and returns into field goal range

– Adarius Bowman caps off a 5 play, 75 yard drive with his 2nd TD of the night, making an incredible 30 yard, one handed catch despite having Jovon Johnson (#2) draped all over him.

– Redblacks turn the ball over on downs after failing to convert a 3rd and inches on their own 25. Head Coach Rick Campbell challenges the spot of the ball (which seemed to be poor) and loses

That’s a penalty?! Horseshit! That should be a sack! #REDBLACKS #RNation

@RedBlacksCFL @CFL Absolutely the worst call of 2014. That is called a tackle.

Ok, I know, I know. And no, it’s not a major penalty for giving the QB a dirty look… it’s only a 5 yarder #CFL

– Catches by Kierrie Johnson (#10), Carlton Mitchell (#88), and Henry², bring the Redblacks into FG range. Following another Burris sack, Maher splits the uprights from 34 yards out to make it 25-11

– Feeling guilty, the umpire tries to atone for the earlier blown call

Thank God the umpire made that tackle, otherwise that was going to the house #REDBLACKS

– Shaw absolutely crushes a 64 yard punt, pinning the Redblacks on their 1 yard line

– Facing heavy pressure the offensive line collapses and Burris is sacked for a safety, the Eskimo’s 5th sack of the night

– With 1:11 left in the game, DeMarco enters for mop up duty and hits Carter and Jackson for long gains before being picked off on the final play of the game

Stats that stand out:

– Johnson was the leading receiver with 4 catches for 28 yards

If the Redblacks Week One loss left fans feeling hopeful and entertained, this week’s was surely the opposite. It’s frustrating because once again the Redblacks shot themselves in the foot by taking way too many penalties. The game was a defensive struggle for the better part of three quarters and the offense struggled to move the ball with any kind of rhythm. Burris needs to be better but no receiver stood out either. Too often it seemed that when the Redblacks receivers ran option routes they weren’t on the same page as Burris. They clearly need more time to work out the kinks and get comfortable with one another. As for the offensive line, they aren’t going to enjoy film study on Monday as they were thoroughly outplayed by the Esks’ front seven, giving up five sacks and failing to open up holes for Walker to run though. On the defensive side the Redblacks struggled to put Reilly under any kind of sustained pressure, even when blitzing. Though special teams coverage was better overall, there continued to be ugly moments that flipped field position, a back-breaker in defensive struggles like this game.

Despite their struggles, the Redblacks were in this game until early in the 4th. The turning point was absolutely the blown call on Lang’s CLEAN sack but there are other plays that stand out, such as Smith stepping out of bounds on a punt return that seemed destined to  be a TD and getting stuffed on 3rd and inches. As Coach Campbell said after the game:

“It’s disappointing. It was a defensive game for a long time and going back and forth and we were hanging in there. We just came up a few plays short. It’s always tough to lose.”

To sum up, though the Redblacks don’t want to be called an expansion team, they’re still the new kids on the block and are going to take their lumps. This game was ugly but with their next game at home in front of a feverish R-Nation, the Redblacks should be able to draw on the crowd’s energy for a better effort and hopefully a win. See you at Lansdowne (TD Place) next week!