Jeff discusses the start of the 2019 USports football season and the outlook for the Carleton Ravens. He also talks brotherly love in Ottawa’s CFL history. Fittingly, this week’s guest is former Raven and current Ottawa Redblacks DL Kene Onyeka, whose brother Godfrey is a DB in Edmonton and cousin Nakas a LB for Toronto.

Jeff is joined by Harrison Brown, co-founder & CEO of HeadCheck Health, a mobile and web-based platform for concussion protocol, care and analysis. HeadCheck has recently become an official partner of the CFL, equipping team medical staffs with their concussion toolset.

With the Canadian Football League draft around the corner, host Jeff Morris is joined by Carleton Ravens football head coach Steve Sumarah to discuss, among other things, the great success his program has had in producing CFL draft picks – a total 11 since 2013.

Jeff provides us with a little bit (read: a lot) of history on the CFL draft, including some of Carleton & Ottawa U’s most memorable draft picks.

For those keeping score, the current standings for total number of players drafted sits at:

Jeff and Steve also discuss the East-West Bowl, a showcase of USports players eligible for the 2020 CFL draft, which takes place at Carleton’s MNP Park on May 11 @12:30pm. Get your tickets here.

This week’s ‘Mount Rushmore’ looks at the four best Carleton Ravens football coaches to be drafted into the CFL.

In the third episode of the Carleton Ravens Football Podcast, we hear from CFL commissioner Randy Ambrosie, who was the keynote speaker at this year’s Carleton Ravens Football Dinner on April 5th, 2019. In a visionary (and pretty darn inspiring) address, Ambrosie not only speaks about growing the league internationally and creating new opportunities for Canadians to play abroad, but also how to “take back” the narrative and start growing the sport locally. Definitely worth a listen.

In this week’s ‘Mount Rushmore’, Jeff gives us the best two-sport athletes to have played for the Ottawa Rough Riders/Renegades/Redblacks. Tons of fascinating Ottawa sports history in this segment.

In the second episode of the Carleton Ravens Football Podcast, Jeff welcomes another former Raven in FB Stefano Napolitano (2013-17).

Stefano shares a few memories from his time at Carleton, including being part of the rebirth of the Ravens football program in 2013 and the remarkable Panda Game victory in 2014. We also hear about Stefano’s experience playing pro football In Italy, with Rhinos Milano in the Italian Football League (IFL). Certainly topical, with the CFL’s “2.0” global initiatives having kicked off in recent months.

In the episode’s Mount Rushmore feature, Stefano joins Jeff and they each provide their four best players from the first five years of the re-launched Carleton Ravens football program.

Jeff sets up the format for the show; Memories from his CFL draft evaluation (precursor to the combine) experience in Vancouver in 1984; Talks about the Junior Ravens football program; A look back at the 1976-1980 Carleton Ravens football teams, recently honoured at the school’s football banquet; This week’s Mount Rushmore looks at the four former Carleton Ravens who had the best CFL careers.

Listen to Episode 1 on SoundCloud here: 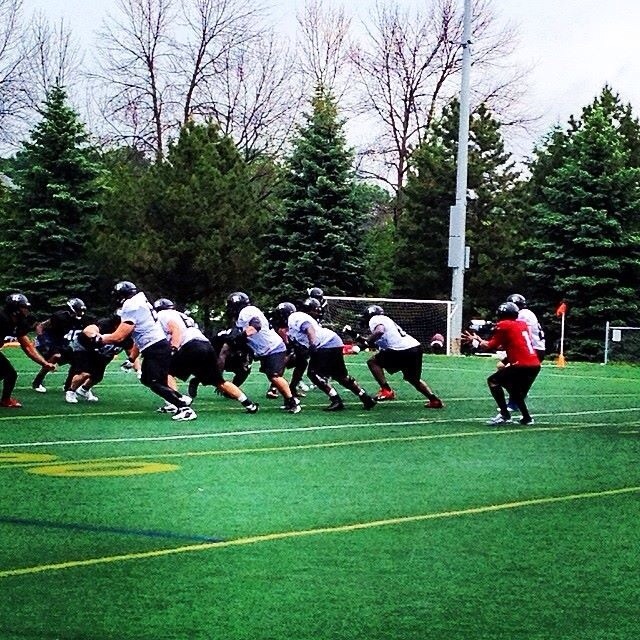 With the Ottawa Redblacks inaugural training camp currently underway at Carleton University, now is a perfect time to take a look at some of the 80+ roster of hopefuls general manager Marcel Desjardins has assembled over the past seven months. While certain starters are already set in stone, there are still numerous jobs up for grabs. 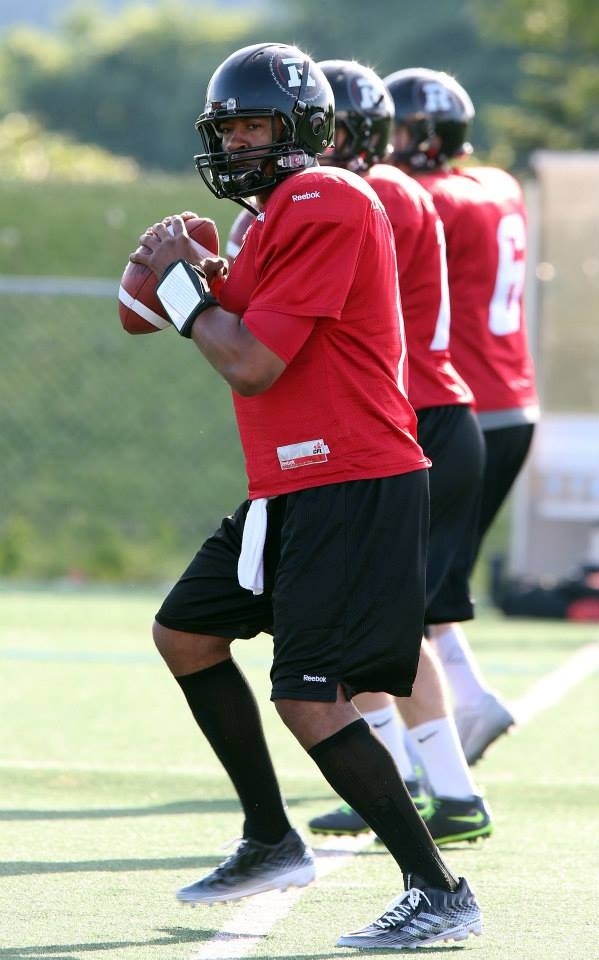 Even with the loss of a disgruntled Kevin Glenn, the Redblacks are deeper than most CFL teams at QB. Barring injury, Henry Burris will be the starter with Thomas DeMarco backing him up, leaving Corey Leonard and Danny O’Brien to grow as development projects and fight for the third-string job. At 39, Burris still has a lot left in the tank and his arm is as strong as ever. DeMarco got significant playing time last year as he filled in for the injured Travis Lulay (and more then held his own), which bodes well for the Redblacks should Burris go down. 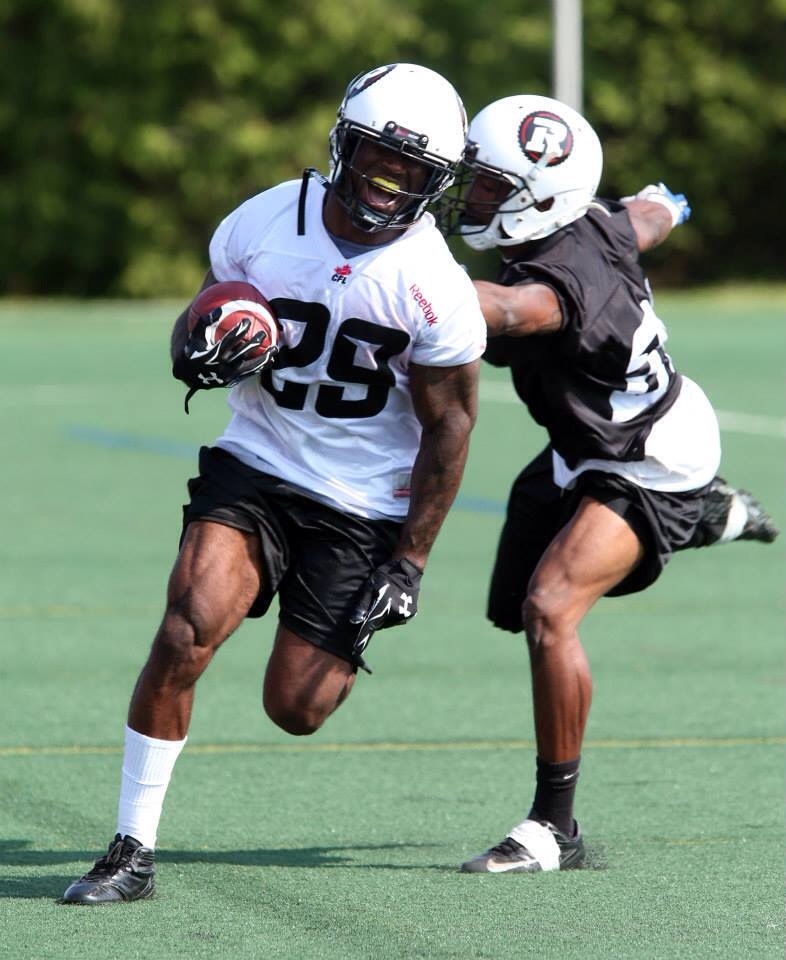 With a stable of capable RBs, it will be very interesting to see who emerges as the guy to go for the Redblacks, or if Head Coach Rick Campbell decides to take a running by committee approach. Chevon Walker has the most distinguished career and has to be considered the early favourite, especially when you consider his familiarity with Burris from their time in Hamilton. Jordan Roberts is a dark horse to be a serious impact player. He dominated in college and with his speed and catching ability seemingly has the skill set to thrive in the CFL. (UPDATE: Looks like Roberts has been released) John Delahunt and Patrick Lavoie will be charged with lead blocking when the Redblacks run out of formations that include a fullback. Eric O’Neal and Michael Hayes round out the group and will also fight for carries.

To say that the Redblacks have a logjam at receiver would be an understatement. With so many players competing for a job, nobody can afford to have a bad practice. Veteran WR Paris Jackson is the elder statesman of this group and should have a breakout year after being under-utilized the past few seasons in BC. The WR group consists of imports like DJ Woods, Carlton Mitchell, Tim Maypray, and Travon Patterson, all of whom boast serious speed, while the non-imports consist of guys like Simon Le Marquand,  Aaron Hargreaves and Garrett Burgess. Fred Rouse and 2014 2nd round pick Scott MacDonnell could see a lot of redzone reps due to favourable height match-ups. 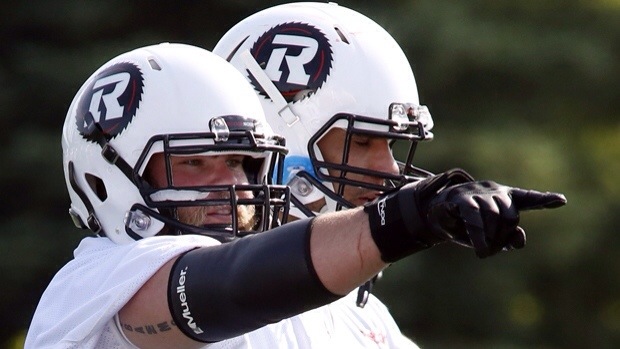 It isn’t an exaggeration to say that much of the Redblacks season will go as all-star lineman Jon Gott goes. He was the centre of attention on draft day and he’ll be the Redblacks starting centre, in charge of making all the protections calls to keep Burris upright. Gott could be flanked by guys like Joe Eppele, Nate Menkin, James Lee and J’Micheal Deane. No matter who winds up starting, you can be sure that they’ll be big, as every OL at the Redblacks camp is at least 6’3″ and pushing 300 pounds.

The defensive line will be led by expansion draft steal Keith Shologan, a heavy hitter with a knack for stuffing the run.  Guys like Justin Phillips, Moton Hopkins, Dimetrio Tyson, Zack Evans, Jonathan Williams and Justin Capicciotti will provide depth to a DL rotation that should keep opposing QBs on their toes all game long.

Amateur pilot and former Stamps safety Eric Fraser will be the focal enforcer of a “No Fly Zone” along with a revitalized Jovon Johnson. Former Saints DB Reggie Jones could wind up playing a significant role in the secondary and look for 1st round pick and jack of all trades Antoine Pruneau to frequently be on the field, despite being a rookie. 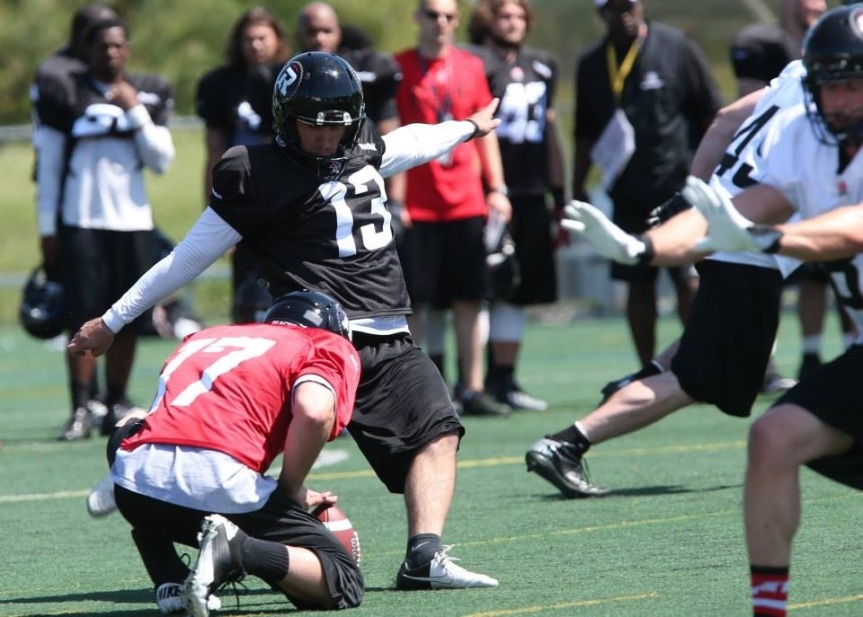 Ottawa native Kevin Scott is living out his dream of playing for his hometown as the Redblacks long snapper, while non-import Justin Palardy is locked in a fierce battle with import Paulo Henriques for kicking duties. Kick returning duties could all to either Tim Maypray, Antoine Pruneau or one of the RBs or WRs who distinguish themselves throughout the pre-season.

Desjardins has put together a nice blend of veterans and rookies, and nearly every positional group boasts a few players with significant CFL experience. One thing that already stands out, even after only a few days of camp, is that the Redblacks look like a very fast team. It’ll be interesting to see who distinguishes themselves during the two pre-season games and ultimately makes the team; hopefully Coach Campbell has some tough decisions to make.