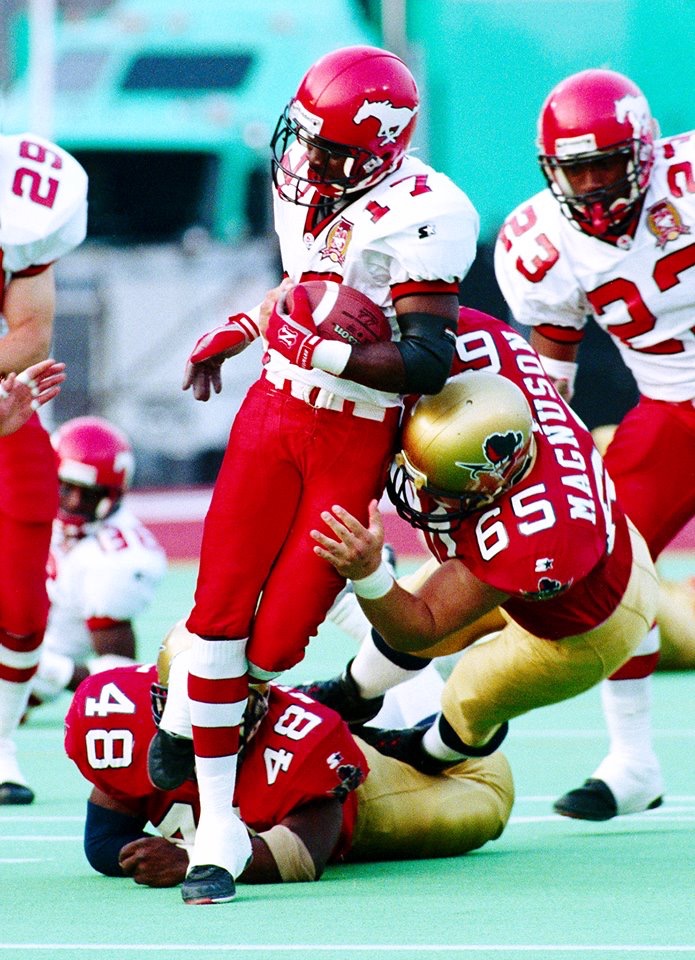 Quinn Magnuson is a former CFL offensive lineman and current co-host of Saskatchewan’s ‘Game Day With Wray’ pregame radio show. In addition to being a great follow on Twitter (and the brilliant mind behind the #CFLTwitterAwards), Quinn suited up for the Ottawa Rough Riders in 1995. That was a bad team. We asked Quinn to share some of his memories with Defend the R.

Tell us a bit about your broadcasting background.
I went to Washington State University on a Football scholarship in 1989 and entered the Edward R Murrow School of Communications for Broadcast Journalism. Education started there as I ran the radio station (KUGR FM). When I left WSU there wasn’t much for radio jobs so I didn’t really get back into broadcasting until 2009 doing some ‘Rider coverage but then was asked to do the ‘Rider Pregame this year full-time for CKOM CJME in Saskatchewan.

I see it has been a passion since at least your university days. What do you love about it?
I love the fans and how passonate they get. Its funny, weird, encouraging, hopeful, sad all at once. These fans, especially Roughrider fans, are the best but they can also be the worst. They are over-zealous and react too quickly sometimes, but hey that’s part of the game. I love being on the air each week and giving the “player’s persepective” too. People need to know what goes through a players head each day / week / game.

How was your first season as co-host on “Game Day With Wray”? Highlights/memorable moments?
Great first season. Started out slow and had to get my chops back, but by the end of the year I was feeling very comfortable. Wray and Chris Cuthbert and Dale iSaac made my job easier as they are professionals that help you along the way. I think the highlight was working with Chris Cuthbert and picking his brain when we had a chance to talk. Absolute gentlemen and such a font of sports knowledge. Also, just having access to so much more info that the average person can’t get.

What else have you been up to since your playing days ended?
Reitred in 1997, went BACK to university and got a degree this time LOL. Taught high school and coached HS ball from 2000-2006. Then left teaching and entered the private sector by owning my own company. Sold that company in 2010 as I was offered a job working at BDC (Business Development Bank of Canada) & been here ever since. Also, have two kids – 14 and 12 – and I have coached them in everything from hockey to soccer to football to basketball. Curently my son is a pretty solid football player at the 12-year old level. He will be better than I was (if he wants to).

How would you characterize yourself as a player? And who were the people/athletes you looked up to or modelled yourself after?
I was a player that maybe didn’t take the game as seriously as I should have. I was talented and had God-given skill and ability. But I didn’t work as hard as I should have and probably could’ve played NFL or been more of a contributor in the CFL. I was a phenomenal long snapper though and that’s probably why I lasted as long as I did in the CFL. I regret not working harder and doing some of the things that other players did (watch more film, spend more time with coaches, etc.). Growing up I modelled myself after the bad boys of football. Brian Bosworth and Tony Mandarich were two players I loved coming out of high school. I wanted to be Tony Mandarich. I went on a recruiting trip to MSU and met Tony. I was hooked and absolutely had to make PRO.

As well, on a personal level, my Uncle Keith Magnuson, former Blackhawks Defenseman (1969-80) was an absolute role model for me both in life and even after his death in 2003. I believe it was his guidance that helped me through high school and college. Even got me an interview with the Bears in 1993 (didn’t make it though).

You spent the 1995 season with the Ottawa Rough Riders. It was the last season of the CFL’s US experiment, on a 3-15 football team and with a franchise that was just about ready to shut its doors forever. Must have been a hoot!
Ottawa was NOT fun. It was a struggle to go to practice every day knowing how bad we were and how much a lot of players didn’t care to be there. We had talent but no “TEAM”. There were a lot of transactions every week LOL

As a player, did the off-field stuff affect you much?
Absolutely!! We were supposed to receive game cheques within 24 hours of the final whistle and we were often lined up outside the offices waiting for extra hours only to have the doors locked and told to come back tomorrow. It was terrible.

Ownership was notoriously cheap towards the end. Hope you didn’t miss a paycheque?
Never missed a cheque but getting them was tough.

There were some good players on that team – Danny Barrett, Mike Richardson… Just not enough of them?
Danny was a great leader and treated the OL well, Mike (whom I player with in WPG too) was great but once again no team chemistry and he struggled as did everyone else. John Kropke was a good player. Irv Daymond too. But players who were in their twilight and too many young players. Bad chemistry.

Any impressions/memories of Rohan Marley?
Rohan was funny but lacked professionalism. He was riding the popularity of his family name. He was, if anything, more of a distraction to the team that became a circus. In fact, in 1995 the CFL was a three-ring circus. Everywhere we went media wanted to talk to Ro. And he wasn’t even a star.

And were those Rough Rider jerseys horrible, or what?
Yup still got mine. Ugly color combo and the gold helmets with the voyaguer on the side. C’mon Man!

Do you still keep in touch with any of the players or coaches from that team?
Im still friends with Dave Black and I Facebook Mike Richardson occasionally. But all in all there wasn’t much cmamaraderie. Tough when it was dog-eat-dog.

What are your memories of the city, specifically?
People didn’t care about the Riders. Any other city if you go to a bar, you get past the lineup , ppl buy you drinks, you get free meals here and there. Ottawa had no clue who we were and didn’t care. Bouncers would laugh when we said we played for the Riders. Sad really. Loved the city itself, beautiful but lacked sports sophistication at the time. Of course the entire league struggled at that point.

What do you remember about playing in some of those American cities, like Memphis or Shreveport?
Ugly, cheap stadiums. Poor crowds. HATED IT. Long travel schedules. The Amercian experiment was a pure MONEY grab by the league and its owners. It was a one million dollar expansion fee that was used to just keep the league afloat. It was the worst thing to ever happen to the CFL. BUT at the same time, the best thing as it made Canadian football fans realize how much they loved their game, and how they wanted to keep it CANADIAN!!! When Baltimore won the Grey Cup, that was the end.

Did you ever see American expansion working then?
I think had they kept it to one or two teams (east and west) it could’ve grown but they added too many too soon and in small-town markets. Also they should’ve kept the teams in the northern states.

What about now?
NOPE. League is strong. Leave it alone.

In addition to Ottawa, you played in Winnipeg, Saskatchewan & Montreal. Can you briefly share a thought on each stop?
Winnipeg – awesome town to play in. They love the Bombers. But the team has been mired in mediocrity for too long. I like Wade Miller there and things will turn around. 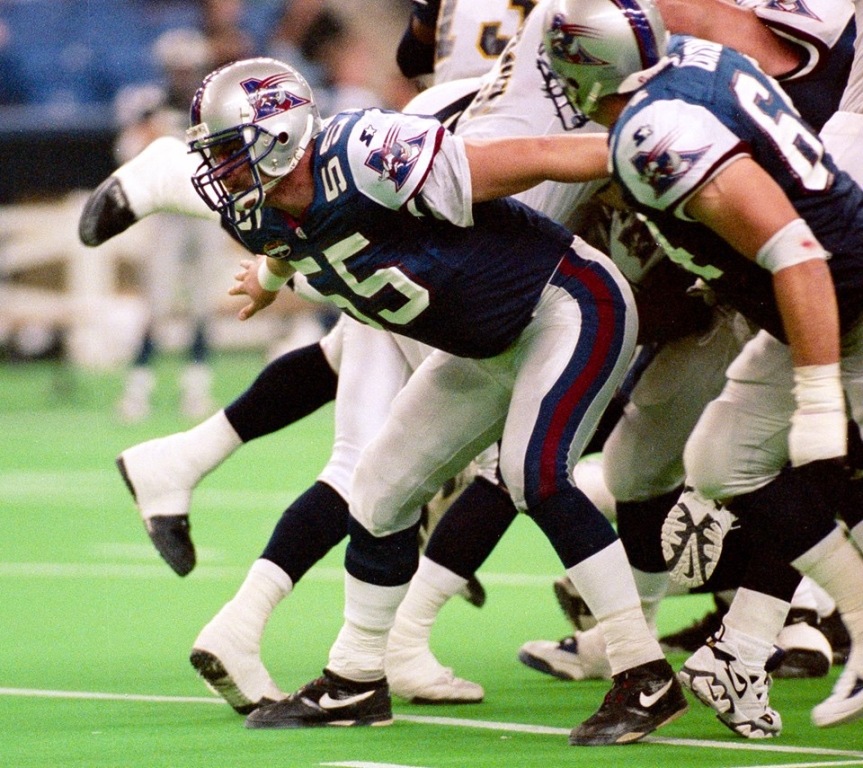 Montreal – got there when the team moved from Balitimre (1996) and there was bad blood between the US players and the Canadians because they had to cut league all-stars to fill the Canadian quota. Once we got through the first few games we were good. Great city. Good organization. Still love Jim Popp.

Regina – when I was there (which was short) the team was terrible. Mostly because of management and coaching. Players were good but the team lacked cohesiveness. And at that time the fans weren’t as enamoured with the team like they are now. LOL

Winnipeg was the best to play and live though. Montreal was expensive and fans took three more years to really come around (i.e. Calvillo’s entrance).

Your late uncle Keith was an all-star with the Blackhawks in the 60s & 70s. Besides the fact that it’s really cool, what kind of impact did that have on you as a budding athlete with pro aspirations?
As mentioned earlier, it was Keith that made me want to play professional sports. He was a great leader and uncle, and always supported me in whatever I did. He was and still is a great influence in my life. Even moreso posthumously, as I want to represent the Magnuson name the way he did.

Before we go, what was your impression of the Ottawa Redblacks after their first season? Roster, coaching, etc.
I think they have something there. But you need to give it a couple of years and also bring in role players, locker room guys who will help the team gel quickly. Football is about trusting the guy next to you. Ottawa has a good coaching staff and players to build off of. But after game 8 they stopped believing they could win and it was “next year country” after that. Tons of potential.

Are you as confident as we are that the team is here for the long-haul this time?
I think the ownership has done a great job and judging by the sell-outs and fan support it should. I think the message form the start has been, “bear with us, well get there” and that’s a good thing. Don’t set expectations too high in Year One. Next year its 9-9. I would love to see the team there forever. It’s a good market with solid university teams in the area, and they need to start drafting players from the University of Ottawa and Carleton, just like the ‘Riders do with U of S and Regina U.

Anything else you’d like to share that I may not have thought to ask?
Our “home locker room” at Frank Clair was the worst I’d seen in pro football or college for that matter. It reminded me of the scenes from Major League when they are using an outboard motor for their cold tubs. LOL. Good guys worked there though. 🙂

Thanks for your time, Quinn. Some great memories and insight.