Today we catch up with Stephen Jones, one of the best WRs to ever suit up for an Ottawa CFL team. During the course of his stellar 10 year career, Jones played for Saskatchewan, Edmonton and Ottawa, was a two-time CFL All-Star, three time CFL East All-Star and won a Grey Cup with Edmonton Eskimos in 1987. Jones made 51 career TD grabs and sits 2nd on Ottawa’s career reception list with 278 catches to his credit, trailing only Tony Gabriel.

Originally you played QB in college. When did you make the transition to receiver and just how difficult was it?

The first time I played receiver was my senior year in university. It was tough at first but at the university level I did well because of my athletic ability.

What was your initial impression of Ottawa when you first came to the city in 1990?

I loved Ottawa long before I signed with the team in 1990. The first time I came to this city was in 1985 or 1986 and it was definitely the most beautiful city I’d seen in all my travels. I knew then, that Ottawa was a place where I would like to live out my life.

In 1992, you racked up 254 receiving yards in a single game vs the Argos, what do you remember about that day?

It was the season opener and “The Rocket” (Raghib Ismail) was coming to town but my teammates and I showed off and stole his spotlight. There were a lot of great plays but two in particular come to mind. The first was a catch that Jock Climie made while lying on his back. The other was a seven yard pass that I dropped that would have given me the record for most yards in one game.

During your time in Ottawa, the team went through a number of uniform and logo changes. Is there any jersey that you really liked or disliked and what logo did you prefer?

Without any question, the all black uniform with the “R” was my all time favorite.  I loved playing in that uniform. 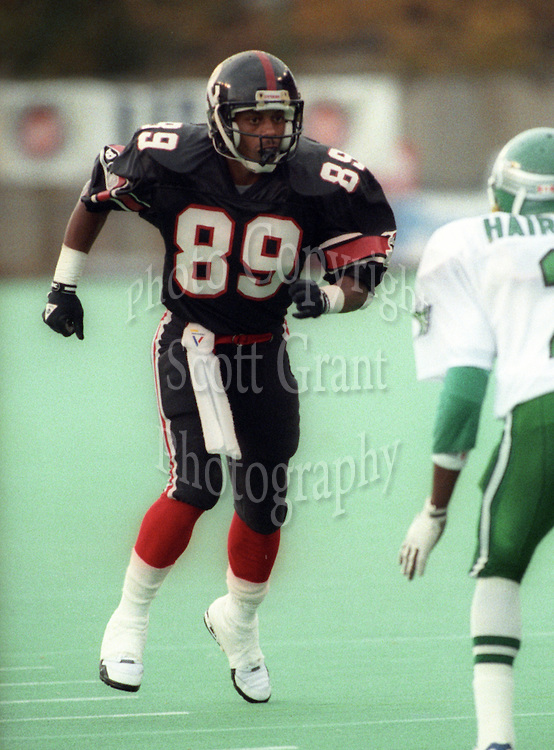 What was your favourite (or least favourite) stadium to play in?

I really loved playing in BC Place because the track was fast and the weather was always great.  Ottawa and Hamilton were tied for next best stadiums due to the close proximity of the stands to the players.

Statistically speaking, the three best years of your career happened in Ottawa. How did you manage to take your game to another level during your time with the Rough Riders?

The ability to stay healthy was a key component. The fact that Ottawa’s turf was hard and fast was a great help.

In 1995 you went from playing for the Rough Riders to marketing and coaching with them. Tell us how that came about and what you most enjoyed about that experience.

That was a tough time for me as well as all the Ottawa fans.  There was nothing pleasant about my playing career being cut short and I was trying to find a positive side to my career ending before it should have. It gave me valuable experience in dealing with the business community.

Throughout the course of your career you had the opportunity to catch passes from a number of QBs. Who were some of your favourites?

Without a doubt it was Matt Dunnigan, followed by Damon Allen and Tom Burgess.  Matt threw the best deep pass in all of football, no one was better.  Tom Burgess was such a fighter and a winner and Damon turned out to be the greatest QB of all time in the CFL.

You were on the receiving end of a number of big hits, who hit the hardest?

A guy nicknamed “Pipes”  (Bobby Dawson), he would lay you out.

Were you a superstitious player?

Not at all but I was a bit crazy.

What was the most disappointing loss of your career?

Nothing was as crushing as the ’92 Ottawa playoff game in Hamilton.  The Rough Riders were winning by two touchdowns with three minutes left in the game and we somehow managed to lose.

This is a two part question. I’ve heard that you are a great singer. What is your go-to karaoke song and would you ever consider singing the national anthem at TD Place?

It’s been a while as far as singing goes, and over the years I have lost my voice.  If I had to pick a song to sing it would be “Baby Stay With Me”  by Jeffery Osborn. And I would decline the offer to sing the national anthem, if I was asked.

Every player has a nickname or two – what was yours?

Looking back on your 10 years in the CFL, what are you most proud of?

Being on a team that won the Grey Cup.

Why did you choose to settle down in Ottawa after your playing career finished?

I love the city, the people are wonderful and the fishing is great.  It’s the perfect place to raise a family.

Since you retired, what have you been doing for work?

I’ve been in the security business and I’ve met a lot of terrific people.

Which current CFL wide receiver is your favourite to watch?

It is hard to pick one as they move around so much in the league, but I like Chad Owens, Emmanuel Arceneaux, and the receivers in Montreal. It looks like Ottawa just picked up a few good ones too.

If you could give young receivers a single piece of advice, what would it be?

Forget about how you look when going after a ball and that you don’t always have to use your hands. Just catch it however you can and never let the ball hit the ground.

Have you made it out to any Redblacks games?

Of course, I’m a season ticket holder and I’m thrilled that CFL is back in Ottawa.

Thank you so much for your time and all the amazing catches you made while in Ottawa. You were easily one of the most entertaining players R-Nation has had the pleasure of watching wear the R.

2 thoughts on “#TBT: An Interview with Stephen Jones”