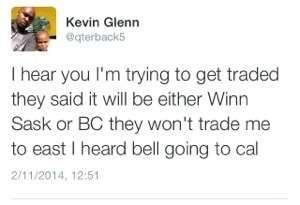 Shortly after the tweets went out, Glenn claimed his account was hacked. The offending tweets were also eventually deleted.

Believe what you like, but it appears Glenn simply committed a social media faux pas and accidentally tweeted something that was meant to be a direct message (DM).

Not exactly the kind of news Ottawa wanted to make on opening day of free agency. The Redblacks subsequently took a lot of (unwarranted) heat for how they have treated Glenn to date, warranted or not. There is definitely more than one school of thought, but let’s take a look at the facts (as I see them, anyway):

1. In Glenn, the Redblacks took the best QB available in the expansion draft.

2. Had Henry Burris been released before the expansion draft things would’ve played out much differently.

3. You cannot fault Redblacks GM Marcel Desjardins for trying to improve the team in adding a QB like Burris, a sure-fire Hall of Famer coming off a Grey Cup appearance. That’s his job.

4. Desjardins probably shouldn’t have anointed Burris the starter at his introductory presser. Some things are best left implied.

5. Glenn woke up the morning the Redblacks signed Burris to find out he’d gone from being a starter to a backup and trade bait.

6. With that said, Glenn was not told he wouldn’t be challenged, ever. Glenn has been around the block long enough to know better.

7. You can’t blame Glenn for being sour; Pro football is a cut-throat business, but these guys are human beings too.

8. While it’s easy to understand why Glenn is upset, for him to let it slip in public is unacceptable, especially on the opening day of Free Agency.

I can recall players saying they were lied to in the past. I can’t recall a player trying sewer free agency process as revenge. #KevinGlenn

As mentioned, Glenn quickly denied any wrong-doing with the “I’ve been hacked” defense, as below.

On an unrelated note, Glenn’s dog also ate his homework… and playbook.

Some local reporters gave Glenn the benefit of the doubt, but Twitter wasn’t buying it.

Pro athletes, if you’re going to claim your Twitter was ‘hacked,’ at least include a weight loss link to make it just a bit believable.

Professional Twitter hackers are now going after backup QBs in the CFL. When will the madness end!?

I suppose the biggest unknown in all of this is what Glenn may or may not have been promised by Redblacks brass. Seems really unlikely that assurances of a starting job were given. The following comes from the Globe and Mail report on the Expansion Draft:

Although he now has Glenn and DeMarco in tow, Desjardins said he’ll be active in free agency to land other quarterbacks. Toronto’s Zach Collaros, Saskatchewan’s Drew Willy, Hamilton’s Henry Burris and Edmonton’s Matt Nichols are all slated to become free agents in February.

“There’s a couple of good options out there and we’re certainly going to pursue those,” he said. “There’s no reason why we can’t be aggressive in that area.

Not sure how much clearer that could be…

Though he might still be upset, Glenn’s best bet is to bide his time. If he ends up staying with Ottawa at some point he’ll get playing time. It’s almost unheard of for a single QB to play an entire season. Or maybe another team loses their starter to a significant injury and the Redblacks feel comfortable enough with DeMarco’s growth to trade Glenn.

As it currently stands, the Redblacks are blessed to have two great QBs in their inaugural season, a luxury the Renegades were denied. They’ve arguably got the strongest depth at QB of any team in the CFL with Burris, Glenn and DeMarco. Good QBs in the CFL are what good goalies are to NHL teams; you can never have too many of them.

In my opinion, this whole episode is a whole lot of fuss about nothing. It’s not as if a player never mis-used social media before. And it certainly isn’t the first time a starter was supplanted by a free agent signing. Glenn should be enough of a pro not to let this kind of thing happen again, and besides, he’s only a play away from being “the guy”.