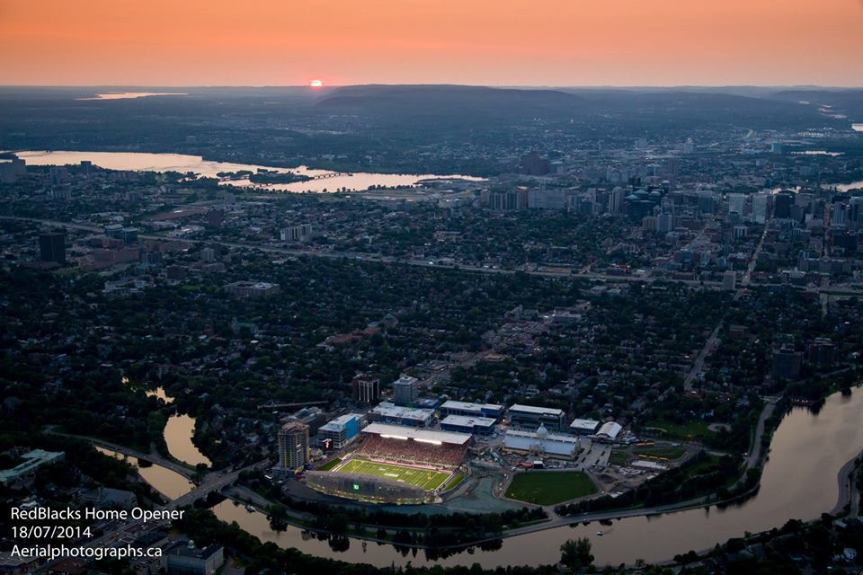 On Friday night, after 3177 days (but who’s counting), CFL football returned to Ottawa with a roar. R-Nation unleashed nine years of pent up energy as the Redblacks survived a tight 18-17 defensive battle to get their 1st win of the season and 1st win at home in dramatic fashion.

– Ottawa was buzzing all week but the vibe around the city really started to peak Friday morning with the CFL, City Hall, Senators, former players and even bus drivers getting in on the action

Rise and shine, Ottawa. It's the day you've been waiting for. #Homecoming #CFL pic.twitter.com/JKvaFyOCTT

We have the @REDBLACKS flag flying proudly at city hall pic.twitter.com/zBDBY6YABk

Good luck to @REDBLACKS tonight from @MelnykEugene & the #Sens! It's great to have football back in Ottawa! #WeRBack pic.twitter.com/d9VFTVYc26

Nothing like running out of the tunnel on #homefield. #WeRBack #Homecoming #REDBLACKS #Renegades #RoughRiders #Ottawa pic.twitter.com/RJFg0qcv8a

My @OC_Transpo driver is wearing a @REDBLACKS jersey. This day started well! #HomeOpener

– Fans arrive at TD Place via bus, boat, bike and car with varying degrees of traffic

– PA announcer Mike Sutherland introduces the Redblacks but nobody feels the need to tell the players milling about inside the helmet to come out, leading to an awkward few minutes of expectation, like that feeling you get when you go to hug someone and they turn their head to the same side

– A military jet flys over the stadium twice, because doing it just once is how the Argos score TDs

– Argos receiving the opening kick off and proceed to march down the field with a variety of short passes. DB Jerell Gavins (#24) makes a great defensive play to break up an end zone pass intended for Argos WR John Childs. 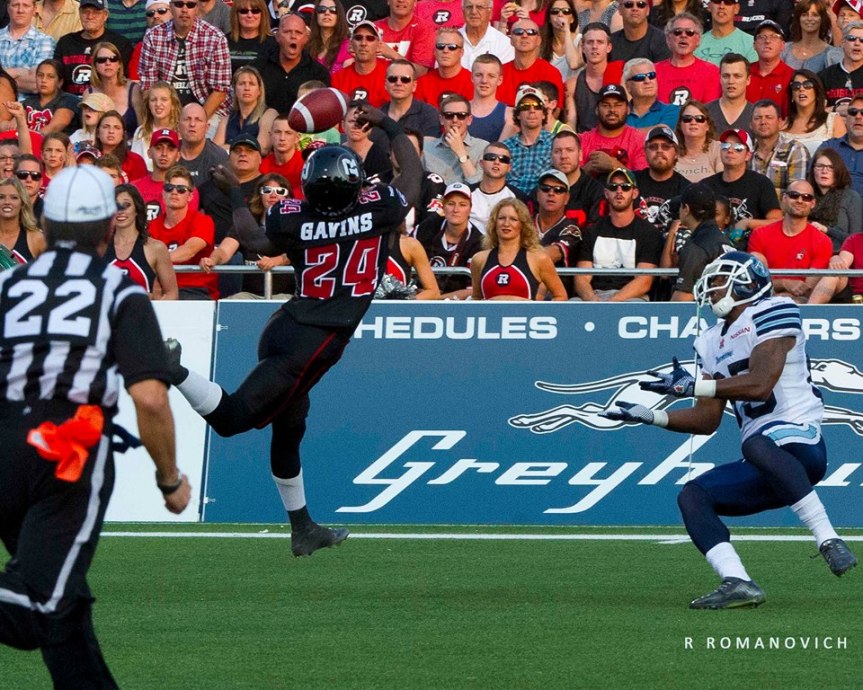 – Aided by a roughing the passer flag and a few strong runs from Chevon Walker (#29), the Redblacks get into field goal range and kicker Brett Maher hits a 26 yard FG

– WR Kierrie Johnson (#10) gets behind the Argos secondary, Burris spots him and delivers a perfect deep ball that hits him in the hands, unfortunately the pass is dropped and the Redblacks miss out on a sure touchdown

– Redblacks are forced to punt following a Burris sack

– Argos RB Steve Slaton rumbles for 14 yards to end the quarter, TD Place announcer calls him Steve Sultan for the first but definitely not last time of the evening

– Carlton Mitchell (#88) goes over the middle and gets absolutely blasted by Dwight Anderson who is flagged for unnecessary roughness. The hit looks clean in the sense that Anderson never makes contact with Mitchell’s head but the zebra man has spoken, +15 yards to the Redblacks

– Long catches by Johnson and Henry² (Marcus Henry #16) bring the Redblacks to the Argos 23; Maher makes a 30 yard FG

– Ray completes a 45 yard pass but is sacked on the next play by new Dad (make sure you say congrats!) Justin Capicciotti (#93) 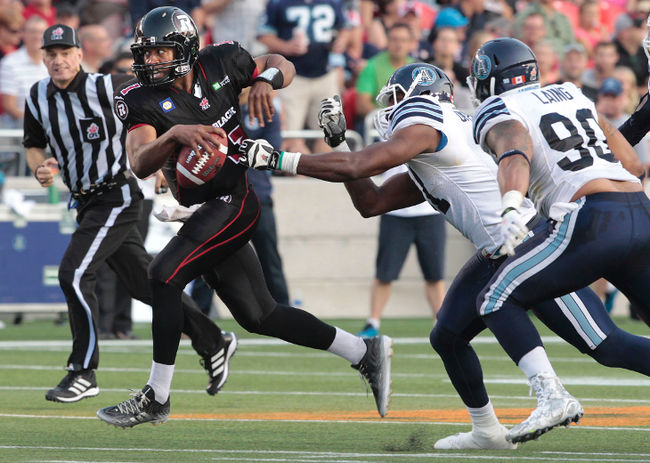 – With 2:38 left the Redblacks string together a series of 1st downs thanks to runs by Burris and Walker and catches by Henry² and Johnson

– The Redblacks pay tribute to their past by retiring and honouring former Rough Rider greats Tony Golab, Jim Coode, Bobby Simpson, Gerry Organ, Whit Tucker, Moe “The Toe” Racine, Ronnie Stewart and Russ Jackson. It was a special moment for the guys who were on hand and for the families represnting those who coudn’t be.

– Jovon Johnson (#2) recovers a fumble giving the Redblacks the ball, unfortunately they can’t get any points off the turnover

– Tristan Okpalaugo gets a hat-trick of sacks on Burris, getting to him for the 3rd time 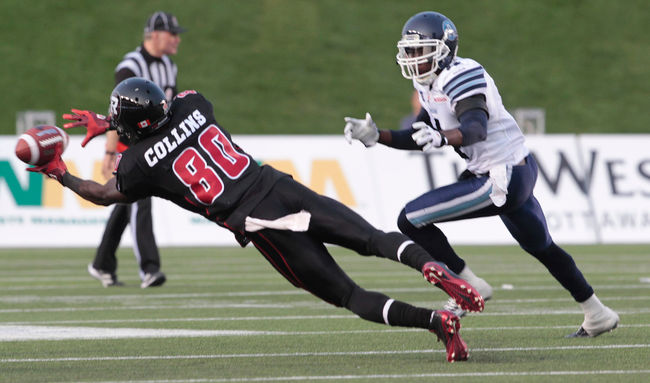 – Following a Matt Carter (#85) catch, Maher makes another FG, this time from 32 yards out

– Ray throws a 20 yard pass to Darvin Adams, hitting him in stride in the back of the end zone

– Walker sweeps through the Argos defense, weaving 28 yards between would be tacklers

– After scrambling for a short gain, Burris hits Johnson for a 43 yard completion on 2nd and 10, moving the ball all the way down to the Argos 21 yard line, also known as field goal range 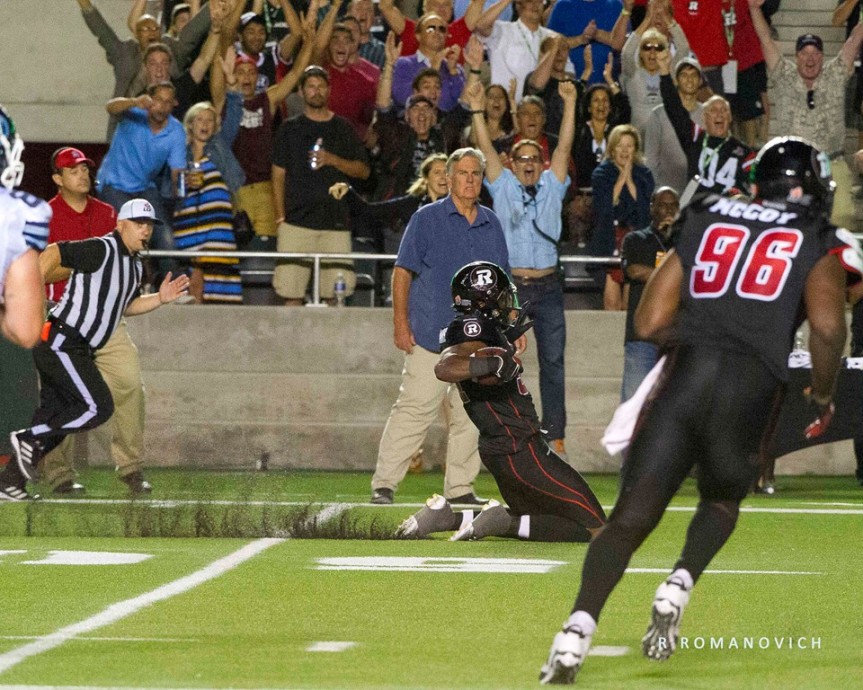 – 5 sacks for the Redblacks defense

On a historic night in Ottawa, the Redblacks won in dramatic fashion, sending the sellout crowd home happy and breaking in TD Place the right way. There were some bumps along the way, but in the end a win’s a win and this one was a long time coming. Offensively the Redblacks woes continued; Burris was under heavy pressure all night and it’s unrealistic to expect him to thrive and be accurate when he’s constantly throwing off his back foot, the offensive line must be better. Additionally receivers continue to have drops in key moments and struggle to create separation. It was good to see Kierrie Johnson redeem himself with the late catch.

“God gave me another opportunity,” said Johnson. “I messed up on the first one, I was wide open. I think everybody and their  momma saw that one.So my teammates told me I was going to have another opportunity. I kept faith. I saw that ball coming to me, and I said I’ve got to make that play, no matter what. It wasn’t an easy catch. I saw the ball, I knew I had to catch it.. I don’t care what’s the situation, I had to catch it.”

Running back Chevon Walker continues to be a home run threat and seemingly every time the ball is in his hands he has a chance to take it to the house. One area that the offensive isn’t struggling in is with turnovers. as the Redblacks have done a marvelous job protecting the football so far this season.

Defensively the Redblacks continued their trend of bending but not breaking. They piled up another 5 sacks and harassed Ray all night long, generating two interceptions and a fumble. Players swarmed to the ball and made good strong tackles. Specials team coverage tightened up and prevented the Argos getting any long gains.

Without a doubt the player of the game was kicker Brett Maher, who was perfect kicking and who thumped punts deep into Argos territory throughout the game.

“It’s a great night,” said Maher. “If you’re a kicker and you don’t want to be in that situation, you’re probably not going to thrive. My whole career, I’ve kicked a bunch of field goals and never hit a game-winner, never even tried one.”

The Redblacks next game will be on Saturday night in Hamilton where they’ll look to build off this win before returning back to TD Place to host Saskatchewan on August 2nd. See you at the game!

One thought on “Game #3; TD Place Comes to Life as the Redblacks Edge the Argos”