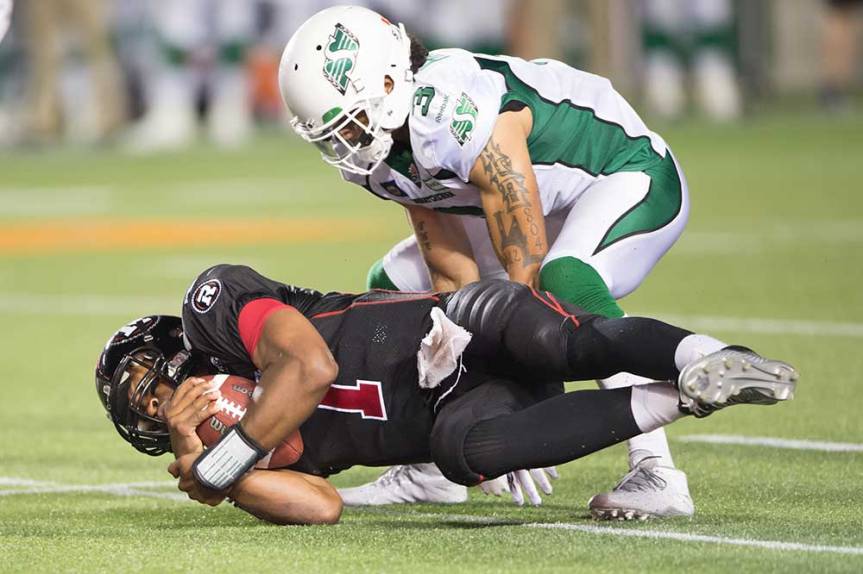 First they took our name, then they took our watermelons, and on Saturday night they took the air out of our stadium. The GREENWHITES came to town for the second CFL game in TD Place history and quickly moved the game out of reach, dropping the Redblacks to second place in the East Divison with a 1-4 record.

– Who would have guessed it would take the Fake Riders six games to finally have the opportunity to play in front of a sold out, LOUD, rambunctious crowd

Riders finally gonna play in front of a sell-out this year… and they have to go to Ottawa to do it. Oh, the irony! #CFL

– Yours truly had a chance to meet and thank Darren Jospeh and Ken Evraire in person, two great Ottawa CFL alumni, for doing interviews with Defend the R earlier this year

– Standing by the sidelines I met the head referee and joked that I’d be waiting for his hometown calls, his face set in stone he informed me that “This isn’t my hometown” (Sorry for jinxing us)

– After an open Jamill Smith (#15) drops a pass that hits him in the hands, Burris tries to show him what he was looking for by throwing a completion to a GREENWHITE defender who brings it back to the Redblacks’ 15 yard line

– The defense limits the damage to a field goal

– On the following possession Henry² (Marcus Henry #16) decides to play hot potato with Burris’ pass, gifting the Fake Riders with back to back interceptions, which quickly turns into a Will Ford TD

– Brett “The Silent Assassin” Maher’s 42 yard punt is returned 63 yards to Ottawa’s 27 yard line, making it three possessions in a row that Saskatchewan starts inside the 30

– Following Rob Bagg’s 26 yard catch, Ford breaks the plane and scores another TD, 24-0 for the Watermelons 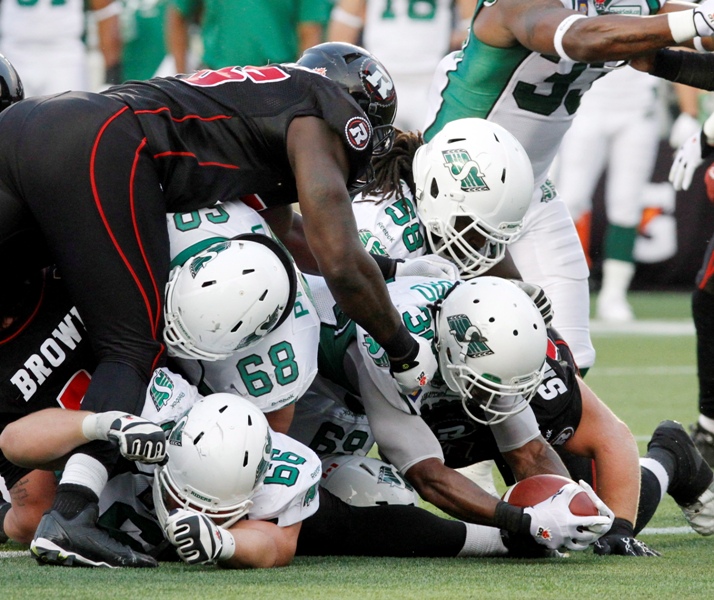 – Watching all his fellow WRs drop passes and feeling left out, Dobson Collins (#80) decides to get in on the action

– Walker busts another big run, this time for 20 yards

– Maher’s 43 yard field goal attempt is short and quickly returned 112 yards for a TD, if you listen closely you can hear a HO-BART chant being murmured

– Chris Milo blasts the kickoff through the end zone for a rouge, extending the Watermelons lead to 32-0

– Desperately seeking to get something going, Head Coach Rick Campbell sends backup QB Thomas DeMarco (#17) in on 3rd and 3; DeMarco’s 73 yard punt is recovered in the end zone by Collins, confusing the zebras but eventually resulting in the Redblacks 1st TD at TD Place

– Probably thinking that they’d never expect another onside punt in the same game, Campbell dials up the same play the next time the Redblacks need to punt, but this time the a player who may or may not have been wearing a watermelon for a helmet catches the ball

– With 5 seconds left in the half Henry² makes a 17 yard catch to put the Redblacks in FG range, but instead of just going down time expires as he tries to pick up YAC (yards after the catch)

– Surprisingly the refs choose to flag nobody for 15 minutes, the longest stretch of the game without an infraction

– Opening the 3rd like they started the game, the Redblacks quickly go two and out

– Not bothered by the fact that his team is trailing 35-7 in front of a festive, sold out home crowd that showed up even if he didn’t, safety Eric Fraser (#7) has enough energy to break it down and busts out SICK dance moves during a TV timeout

– Smith and  Henry² decide to add to their drop totals

– Having apparently used up all his good kicks in the home opener, Maher shanks a 45 yard FG attempt

– DeMarco enters the game, going 4/4 for 75 yards and a TD and looks like God simply because Matt Carter (#85), Henry² and Smith suddenly decide to start catching the passes that have been hitting them in the hands all night

– Final Score: 38-14 for the one team I hoped we’d beat more than anyone else this season

The Redblacks were always going to be in tough against the defending Grey Cup champs, but nobody in the stadium thought the game would unravel as quickly as it did (maybe minus the drunk guy with a watermelon mohawk in my section). By going down 24-0 in the 1st quarter, the Redblacks’ game was over before it really had a chance to begin. That being said, there were opportunities to claw back that were…..dropped. Our receivers tonight were terrible, dropping numerous passes that hit them right in the hands. Some of them might not have been easy catches but can we take a minute to remember that these guys are supposed to be professionals? The offensive line had another tough game, failing once again to open holes for Walker and in giving Burris enough time to properly step into his throws. Burris might not have had his best game but anyone pinning this loss on him would be wrong. He gave his guys opportunities to make plays, but too often they let them slip through their hands.

On the defensive side of the ball we always seemed to be a step behind the play. Tackling angles were poor and our front seven failed to apply consistent pressure on Durant, and when you give a guy like him enough time, he’ll pick you apart. With that being said, the defense really stepped up in the second half, limiting the GREENWHITES to 6 points (two FGs). DB Reggie Jones (#20) had a decent debut whereas Seth Williams struggled for the most part in coverage.

Special teams had one shinning moment in an otherwise horrendous game. Dobson Collins’ onside punt recovery was brilliantly executed and was the first onside punt recovery since Dick Adams (of the Ottawa Rough Riders) did it in 1973. The kick coverage was like Swiss cheese, full of holes, and ended up repeatedly flipping field position along with a momentum crushing 111 yard TD return.

The men in stripes dominated the game and there was seemingly a flag after every play. The Redblacks inexcusably took 12 of the 19 penalties for 136 yards, with Jeraill McCuller (#50) picking up three unnecessary roughness flags. Until the coaching staff figures out a way to limit the flags, the Redblacks will continue to struggle to win games.

With a tough Calgary Stampeders team on deck, the Redblacks will have to put this loss behind them and head back to the drawing board.

*All images courtesy of CFL.ca, Roman Romanovich, and my camera

6 thoughts on “Game #5; GREENWHITES > REDBLACKS (for one night only)”