In this week´s Throwback Thursday Interview, we sit down with Ken Evraire, a former SB (slotback) for the Ottawa Rough Riders. A star receiver with the Wilfrid Laurier Golden Hawks, Ken was drafted by Saskatchewan in the 1988 draft, but traded to Ottawa before the season started. After 9 seasons in the CFL with 4 different teams, Ken retired and started a broadcasting career in Ottawa.

RR: Coming out of  Wildfrid Laurier University you were drafted by  Saskatchewan, how surprised were you to start the season with Ottawa?

KE:  I was quite surprised when I was traded to Ottawa. I was drafted by the Saskatchewan Roughriders as a DB despite my being a 2-time All-Canadian receiver at WLU. I learned a lot as a DB during my rookie training camp which was key to my success as a receiver in Ottawa. With that said, my agent and I had worked hard to be traded to the Toronto Argonauts. Roughrider GM Bill Baker called me into his office one day and told me to say hello to Wayne Giardino (GM of the Ottawa Rough Riders) and not Bob O’Billovich of the Toronto Argo as thought it would be.  In hindsight, everything worked out for me and becoming an Ottawa Rough Rider was a great highlight of my career.

Speaking of Wilfrid Laurier, can you walk us through that fabled 106 yard Yates Cup play?

We faced a very strong Western Mustangs team led by a boatload of all-stars, guys like Blake Marshall, Pierre Verscheval, Irv Daymond, Matt Janes, Kyle Hall, etc. Western made a concerted effort to take away our play action vertical passing game. I always played on the right side but the coach decided to move me to the left. Rather than facing Kyle Hall I lined up against Marius Locke. We called a 3 step pass play that hinged on a signal I relayed to QB Mike Wilson. I had a feeling Marius would be aggressive so I signaled for a slant and go. Locke bit on the slant and Wilson threw a perfect pass. I scored what was the go ahead TD but we lost thanks to a last second TD scored by Blake Marshall.

Growing up were you a Rough Rider fan and did you get a chance to see a lot of games at Lansdowne?

I was very much a Rough Rider fan thanks in large part to the time I spent at the Ottawa Boys and Girls Club. The Rough Rider players took time out to visit us at the club so I immediately identified with them. Then, thanks to the donation of Rough Rider tickets I was able to go to games with my family. My dad always made sure we arrived before the pre-game warm ups so we could watch the players prepare and watch how they carried themselves as they prepared.  Once the game ended, we would jump on to the field to meet the players. QB Rick Cassata gave me his chinstrap which was a very big deal for a kid back then.

Over your career you had the opportunity to play with a number of  talented QBs, I know it may be tough to say but who did you most enjoy catching passes from?

Damon Allen…there is no argument. Damon’s passes would land in your hands like he handed it to you. He was so athletic and thanks to his baseball background he had great touch. He always knew when to put some heat on the pass or when to drop it in over the top with a soft touch.

Did you have a favourite (or least favourite) stadium to play in?

I never enjoyed playing in Calgary. With the change of elevation you would feel great in warm ups and then your legs would just die when you came back out to play the game. Plus, you had to walk up this long ramp to get back to the locker room. Not fun! Winnipeg ranks a very close second.

Who was the biggest trash talker you ever played against?

The biggest trash talker that I played against was actually a group of players. The Winnipeg Blue Bombers had the best LB core (James West, Tyrone Hill, Paul Randolph, Greg Battle) and they talked trash from the first play right through to the end of the game. I had a lot of respect for them because they played hard. Intimidation was a big part of their game and they were good at it.

Looking back on your career what are you most proud of?

When I look back on my career I´m most proud of the people I met (teammates and fans). When you are in the moment you compete to win and you are measured by your performance on the field. Yet the time spent with great teammates, laughing so hard you think your lungs are going to explode, growing up as a young man and experiencing the human connection that transcends the game on the field will always mean a lot to me.

When your cousin Chris Evraire entered the CFL, what kind of advice did you give him?

I simply told him that he was good enough to play pro ball. Yes, there are some great athletes and they come from some very significant football programs but at the end of the day it’s all about competing and about who wants to succeed more.

After your football career ended you settled in Ottawa and got  into broadcasting with A-Channel, what was the most difficult transition in going from playing sports to talking about them?

I think letting go of the game was the greatest challenge for me. In my heart, I wanted to play forever, but my body was telling me it was time to let the game go. With that said, I was quite fortunate in working with so many great people at A-Channel. They were the next great team I was honored to have been a part of.

Since retiring you’ve gotten into coaching. How would you describe yourself as a coach?

I coach athletes “up”. My focus is to prepare the athlete for success in the moment and prepare them for the next level of competition they will face once they move on. If you coach up then the winning takes care of itself. You may not win the championship but you play a key role in cultivating better athletes and even greater people. 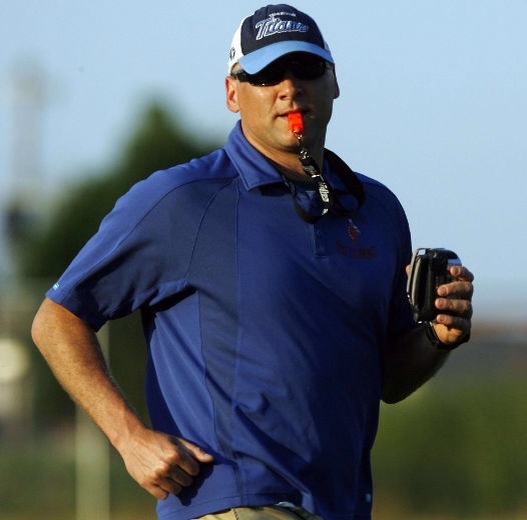 What are you currently doing for work?

Will you be out at any Redblacks games this summer?

I will be at the Redblacks games with my wife and kids just as my dad had brought my mom, sisters and brother to games. We will show up early to watch warm ups and cheer the team on through thhick and thin.

What do think of the Redblacks new uniforms, do you prefer the home or away ones?

Give me one reason why you think the Redblacks can be competitive in their inaugural season.

I think the team will be competitive thanks to their great coaching and scouting staff. Coach Campbell understands the value of the Canadian athlete and the need to find players (be they Canadian or American) who are up to the challenge of being competitive. Winning is a state of mind! What the team thinks and believes before the ball is kicked off will be important. The players will be able to draw on what is a great football legacy and a great fan base in Ottawa.

Thank you very much for your time Ken, and see you at Lansdowne!

2 thoughts on “#TBT: An Interview with Ken Evraire”