Our guest today is former Ottawa Renegade FB Mike Maurer. Maurer, a Saskatoon native, was selected from BC by the Renegades in their 2002 expansion draft, and went on to start 44 games during his time in Ottawa. Known for being a bruising back with a penchant for laying devastating blocks, the two time winning Grey Cup champion (2000 and 2005) enjoyed a stand out 13 year career in the CFL and finished in a tie for second place on the CFL’s career special teams tackles list.

Before breaking into the CFL, you served in the Canadian Forces, tell us about that experience.

At the time, I thought that might be my career path, as I chose not to play football after graduating high school. Being in the military taught  me valuable lessons; how to work hard, be a team player, self discipline, what it means to be mentally tough, and to be part of and do something greater than myself.

What was your initial reaction when you found out that you’d been selected by the Renegades in their expansion draft?

A little disbelief but lots of excitement at the same time. The Lions weren’t offering a very flattering contract extension, so with Ottawa selecting me that early it meant I was wanted and valued, and that felt great.

During your time in Ottawa you often were the lead blocker for Josh Ranek, who was nicknamed “The Little Ball of Hate”. As a FB why did you enjoy blocking for a guy like that?

Josh is an unbelievable guy, someone I’m still good friends with to this day. Josh also exemplifies what it is to be a professional athlete – the first one in the building and last one to leave. For those reasons, it was easy for me and everyone on offense to block for him because he worked so hard and wanted the team to be successful so badly.

The only rushing TD of your career came while you were on the Renegades, talk us through that play.

To be honest I don’t remember the play too much, it’s in the books as a run but I actually think it was a fumble recovery. We were on the goal line and I blocked my man into the end zone and was looking over my shoulder to watch Darren Davis run in, but the ball popped onto the ground and I just jumped on it.

As a blocking fullback who was a dual threat on screens, what was your favourite play to run?

In Ottawa we ran something like a bit of a shovel pass where it looked like a zone-lead play. I’d motion to the left and the tailback and QB would play-action to the left while I slipped behind the line back to the right. That’s when the QB would turn and dump it to me.  A mis-direction play like that was normally good for a solid gain, especially if we’d been running the ball well throughout the game.

Joe Paopao is often credited with keeping the Renegades team very close, even through challenging and difficult times. What did you most respect about him as a coach?

It’s always beneficial for a coach when he’s actually been a player himself, because when he’s coaching the guys know he’s walked in their shoes. Joe wore his heart on his sleeve, and he had such passion for the game.  He was always coming up with activities for the team to do together, and he knew how to treat his players. I don’t think I could pick one thing but he really knew how to get the players to go to war for him and leave it all out there on the field in a way I haven’t seen from anyone else.

In 2005, you were a member of the Eskimos and played in what I consider to be one of the best Grey Cups in CFL history. You were named the Most Valuable Canadian for your role in the victory. Looking back now, what sticks with you about that game?

I recently watched the game for the first time since 2005.  What struck me while I was watching it was that it felt like I was watching the wrong game. When I played I was never a scoreboard watcher, so it felt wrong seeing the score with Montreal being ahead for so much of it. During the game it felt like we had it all under control and had all the confidence in the world, as if the final result was a foregone conclusion. I was so surprised watching it again to see we were the ones to come from behind and tie to send it into overtime. It just didn’t have that feeling.

What was the biggest hit you ever gave or received?

I know I’ve had my fair share of big hits dealt: some special teams blind-sides and as a FB burying a guy or knocking guys clean off their feet on a peel-back or downfield hit. But I specifically remember a few times where I got blown up: Fred Perry got me on kickoff cover and I didn’t see him coming and he ear holed me pretty good. I essentially did a cartwheel, but I did get up immediately and still got in on the tackle. The other was while I was with Edmonton and I ran a shallow pattern into the flat, Ricky Ray shouldn’t have thrown me the ball since there was a corner sitting in the zone but he did. I caught the pass and the split second I turned my head the DB hit me in the chin with his crown and the first thing that hit the ground was my head. I believe it was dubbed the hit of the year on TSN.

Over the course of your career you racked up 168 special teams tackles. What’s the trick to bringing down a dangerous returner?

You know if I had known I was that close to the all-time record which I think was 182 or something I would have played another season to be #1. I was a tailback early in my career, and my aggressiveness matched just about anyone. I suppose my aggressiveness plus being given the opportunity to make tackles, combined with the reckless abandon of not caring what happened to my body, was the recipe.

In your opinion, which stadium has the best hecklers?

Saskatchewan, Winnipeg, Montreal and Hamilton were all tough places to play. That being said, it’s got to be Saskatchewan or Hamilton though I’d probably put Hamilton #1 because it seemed like the fans were so close to the field, they seemed right on top of you.

After retiring following the 2007 season, late in 2008 and then again in 2009 you came out of retirement to play a few more games. What led to those decisions?

My daughters got to an age where they’d often voice their opinion of me playing away from home, so that’s how I knew it was time to hang them up. As for me coming out of retirement, it was something that kind of caught everyone by surprise, but I felt a strong allegiance to Edmonton as they’d treated me so well. In 2008 they asked if I wanted to be part of a playoff push and since it only ended up being the last 4 games of regular season and 2 playoff ones, I wasn’t gone from home for too long  Then in 2009, right before the Labour Day home and away with Calgary, Edmonton was hit with the injury bug.  I think 3 or 4 Canadian backs were hurt and they needed someone that could come in and start on offense. There wasn’t really any players out there that could’ve walk in off the street to start so I decided to come back again. The tricky part about 2009 was that the offensive terminology was different, so Ricky Ray would call the play in the huddle, then as we broke and walked to the line he’d call the play again as we used to call it in the past, just for me to understand. Looking back it’s pretty funny, thankfully Ricky Ray was a great QB to play with and he helped me a lot. After that stint I realized I needed to stay retired, I’d escaped my career without major injury and wanted to stay keep things that way.

How would you characterize yourself as a player and did you have anyone you tried to model your game after?

As a player all I wanted to do was leave it all out on the field, every play, every game. I looked at every play as a street fight where I needed to win my 1-on-1 battle.  So in a few words I’d like to think of myself as a tough, hard-nosed guy that gave everything he had every play, regardless of the score.  I tried to be the best version of myself, and tried to take what I had and make the most of it.

It stuck because after I made the team with the Saskatchewan Roughriders, the media told me I was the first person to make the team after being assigned #19 in over a decade.  I thought maybe that was good luck sign so I kept it. Also, back then it was an oddball number and I enjoyed being different. 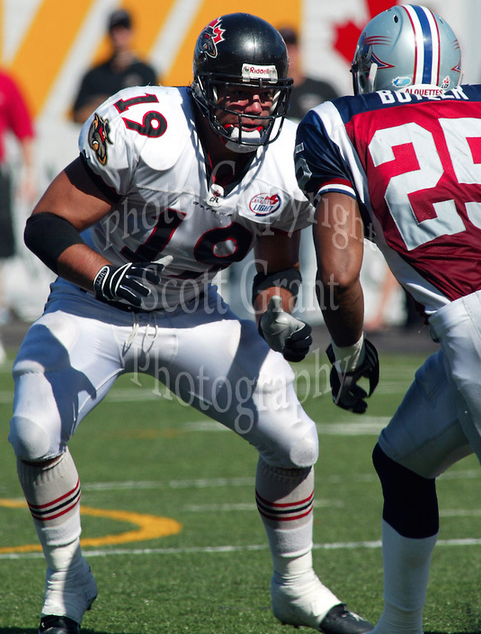 What was your typical pre-game meal?

It was pretty much always a chicken breast, pasta and fresh vegetables and fruit.

In the 2006 off-season you made headlines when you debuted in the Maximum Fighting Championship. How did that come about?

Mixed Martial Arts and Brazilian Jiu-jitsu were part of my offseason training and I enjoyed the sport, it was a great hobby that I still train in and don’t consider myself retired from it at all.  During an interview I mentioned that I trained and had the desire to compete and Mark Pavelich, who was with the Maximum Fighting Championship, heard that and approached me.

Tell me thing that the average CFL fan doesn’t know about you.

I’m a board game geek.  My idea of a fun night would be to have family or friends over to play some games. Strategy games like the Game of Thrones board game, Spartacus, Ticket to Ride, Agricola, Pandemic, Kingsburg, Last Night on Earth, and Red Dragon Inn are my favourites.  I probably have in the neighbourhood of 50 games that I like to play depending on my mood or the group I’m with.

What are you doing for work nowadays?

In the past I’ve worked as a childcare worker at a treatment centre for youth at risk, and applied at the Police and Fire departments, but have settled into what is essentially a sales rep job with Corix Water Products. They’re a North American distributor of water and wastewater products like pipe, valves, fittings, and so on. I also own a tree cutting company called Wolverine Tree Services.

Do you still keep in touch with a lot of your former teammates? If so, who?

I still see Josh Ranek once or twice a year, we’re quite close. Mike Abou-Mechrek lives a few blocks away and I still chat with Dan Farthing and Dan Rashovich. I’m just starting to get involved with alumni associations and am looking forward to reconnecting with a lot of past teammates, many of whom I consider to be brothers.

Thanks so much for your time Mike and all the best!

One thought on “#TBT: Catching up with Mike Maurer”