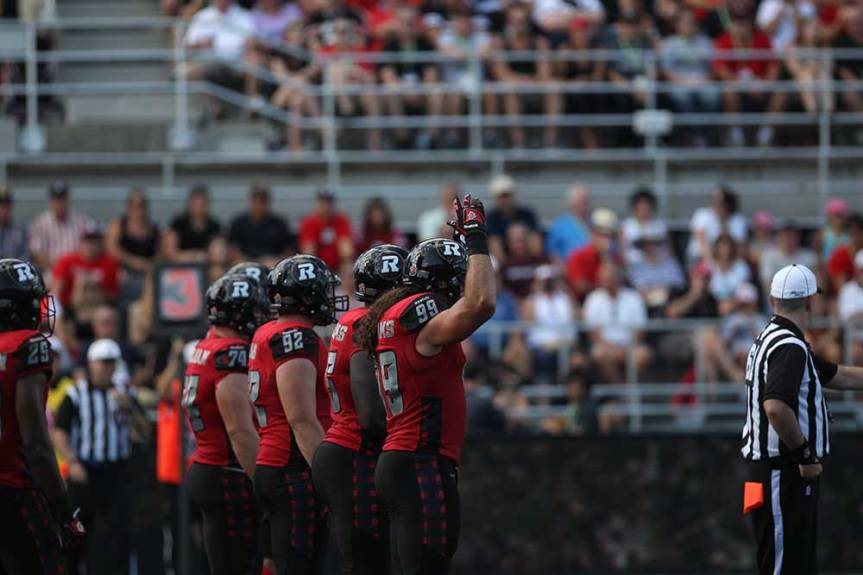 On a beautiful Sunday afternoon and wearing two thirds of their new CFL Signature Look uniforms, the Redblacks welcomed the Calgary Stampeders to TD Place for their only matinée game of the season. Despite battling hard all game the Redblacks ultimately lost, dropping their record to 1-7 on the year.

– Continuing to prove that Ottawa is indeed a football city, the Redblacks record their 4th straight sell-out

Another sellout! Thank you to the 24,327 fans in attendance today! #fourinarow #CGYvsOTT #CFL #RNation pic.twitter.com/Mt8zn93f0A

@AndrewBucholtz Figures. They’re probably being hand painted at an artisanal helmet boutique in the Glebe.

Depending who you listen to the #REDBLACKS either refused to wear the plaid helmet or they werent ready. Either way #REEBOK screwed up.#CFL

– The Redblacks strong defensive play carries over from last week as Antoine Prunueau (#6) tips Bo Levi Mitchell’s pass and Jonathon Williams (#75) does his best Odell Williams impression, picking it off and rumbling 35 yards to the house, sending #RNation into a frenzy; 7-0 for the home team

– After picking up a 1st down and being flagged for holding, Henry Burris’ (#1) pass sails over Wallce Mile’s (#84) head when he stops running for a deep ball

– Prunueau continues to fly around, tripping up Cornish as he tries to bounce a run wide 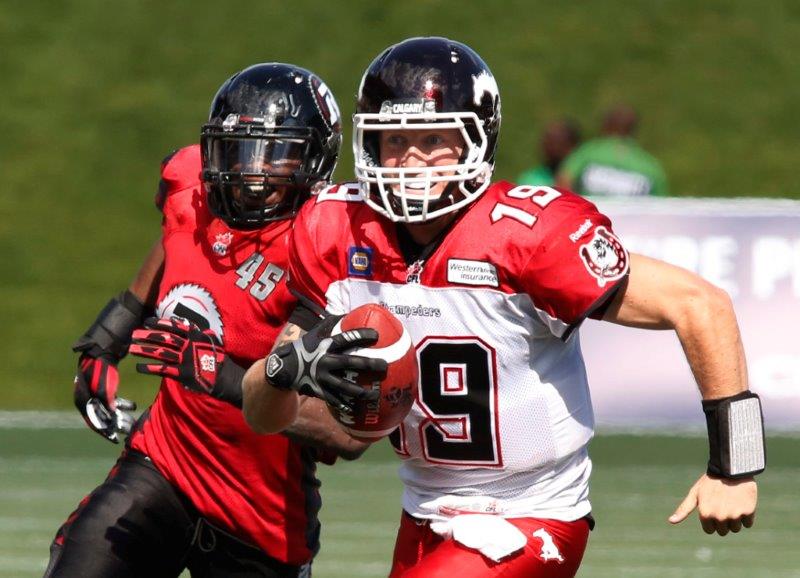 – Facing 3rd and 1 on Ottawa’s 7 yard line, Stamps HC John Hufnagel sends out the short yardage package and back up QB Drew Tate scrambles to the outside, strolling into the end zone and capping off an 11 play 52 yard drive to even the score

– With the help of Jerrell Gavins (#24) , safety Eric Fraser (#7) breaks up a deep pass, seemingly for the first time this season

– Prunueau breaks up a pass on 2nd and long

– Stamps kicker Rene Paredes breaks his streak of 12 straight field goals, missing a 31 yarder but still tacking on a rouge

– Jermain Robinson (#32) nearly picks off Mitchell, but instead gets flagged for illegal contact

– Jasper Simmons (#31) tackles Cornish short of the first down, forcing the Stamps to punt 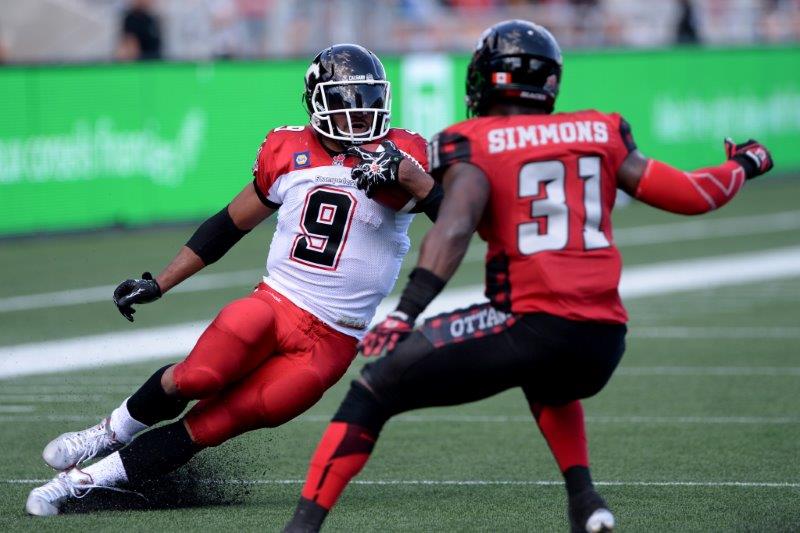 – Showing his wheels, Burris scrambles for a 1st down

– Full of incorrect tidbits, TSN announcer Duane Ford mentions that the Redblacks haven’t scored a TD in 44 straight offensive possessions and that Kerry Jospeh was the last QB to throw a TD in Ottawa (which is wrong since Thomas DeMarco (#17) did it against the Wheaties earlier this year)

– A promising drive that featured Khalil Paden’s (13) first catch as a Redblack a few strong runs from Walker ends in a punt when Burris is sacked for a 17 yard loss, pushing the Redblacks out of FG range

– Gavins gets flagged for illegal contact, bringing the Redblacks total to 6 flags for 52 yards so far

– Pocket collapsing, Burris fumbles but the Redblacks retain possession when J’Michael Dean (#64) hops on it like an offer of seconds of home cooking

– With 30 minutes of play in the books, the football jerseys lead the hockey jerseys 8-7

– The Redblacks receive the ball to start the half and move the chains a few times thanks to Walker’s tough running, another Paden catch and a QB draw 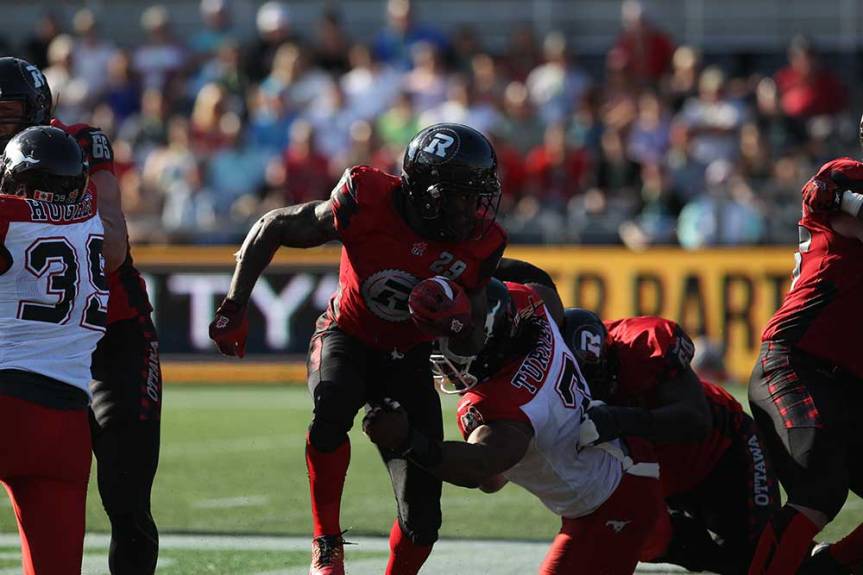 – Crowd noise is a factor as the Stamps get flagged for false start, pushing them back to their 5

– Picking up where he left off last week, Williams nails Mitchell up high long after the ball is out and gifts the Stampeders 15 yards

– Joe West burns by Fraser for a 58 yard catch

– Trying to take advantage of another defensive gift, Miles and Henry² (Marcus Henry #16) make catches of 22 and 4 yards respectively before Burris gets clobbered as he throws and tosses the ball right at Stamps DB Jamar Walls

– Despite catches by FB John Delahunt (#49) and Miles, the Redblacks stick to their trend of going two and out

– Overcoming a 3rd down, the Stamps eventually punch the ball into the end zone when Sederrik Cunningham runs 20 yards untouched

– With the score at 18-7 and thinking they’re at a Sens game wayyyyy out in Kanata, some uneducated members of R-Nation begin to leave the stadium

Dear #RNation, it's not a #Sens game and TD Place isn't in Kanata, there's no way you should be leaving the game already #SitDown #REDBLACKS 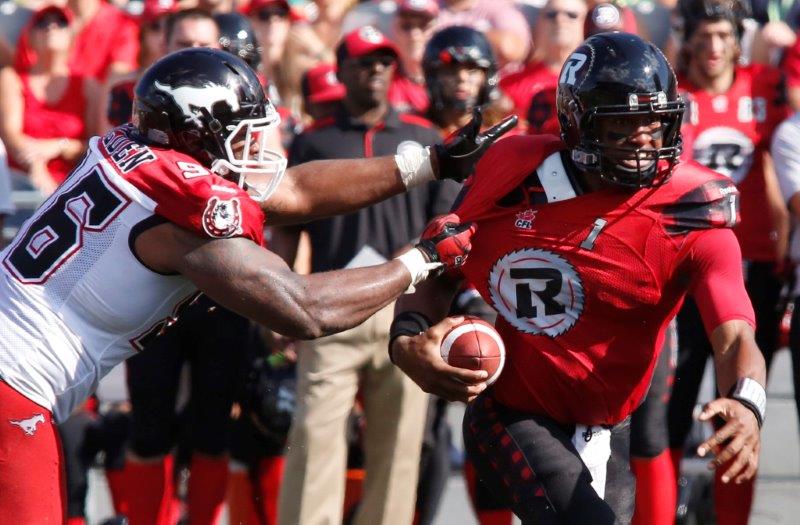 – Proving that lightening can strike twice, Cunningham fields Maher’s short punt and weaves 66 yards to the end zone, *note* Eric Fraser falling down without being touched doesn’t help the coverage any

– Exhausted after being on the field for most of the game, the defense finally snaps allowing another TD when Hugh Charles gallops 15 yards untouched

– With just over a minute left in the game, Junior Turner comes in low on DeMarco and delivers a shot to his knee, in all likelihood tearing an ACL/MCL, ruining his season and quelling a QB controversy in the Nation’s Capital 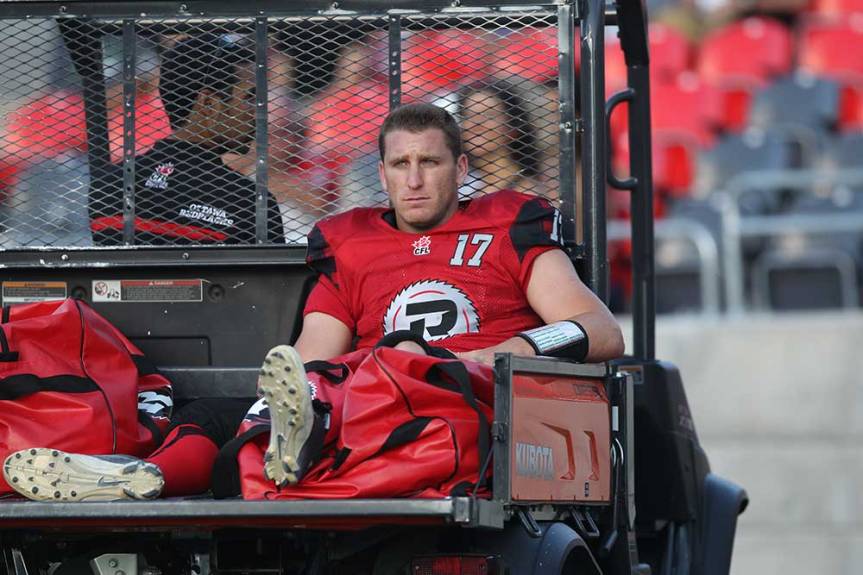 Deceiving final score: 32-7 for the best team in the league

Walker had 11 carries for 43 yards

Collins made 5 catches for 44 yards

Another week ends with another frustrating loss. Ottawa fans packed TD Place and brought the noise all game long, but while R-Nation showed up our offence clearly didn’t. Burris had a game to forget, overthrowing his receivers on the rare occasions that he a) had time to plant his feet, and b) had an open man to throw to. Chevon Walker had his moments running the ball but Ottawa’s play calling wasn’t consistent in feeding him the ball. Watching the Redblacks’ inept offensive execution led to an unruly home crowd that repeatedly booed the offence off the field and invoked the struggles of Rough Rider days of yore with “Ho-bart” chants. This was also the second week in a row that the defence generated turnovers that the offence failed to turn into points.

@RichSavarie Christ, in Canadian ball, you can damn near score by accident. These guys have turned a first down into an event.

While the offence continues to struggle, the defence was once again stellar and tried to pick up the slack. Guys like Simmons, Pruneau, Williams and Shologan carried the day for as long as possible, even going so far as to score, but it’s unrealistic to expect the defence to hold up being on the field for as long as they were. When you hold a QB like Mitchell to 0 TDs, you should win the game. Losing Eddie Elder to injury hurt, as it pushed Eric Fraser into the game and where was repeatedly victimized on deep throws. In terms of special teams, minus the one short punt that was returned for a touchdown, Maher was solid punting and the kick coverage that was putrid at the start of the season has really tightened up.

This was once again a game that the Redblacks hung around in until late in the 4th quarter, when a tired defence collapsed and allowed the Stamps to put up 21 points in 4 minutes and 5 seconds. The final tally doesn’t accurately reflect how close the score was for most of the game. On that note, it’s frustrating as a fan and must be disheartening for the players to see fans stream out of the stadium when there’s more than 8 minutes left in the game. I know a lot of Redblacks’ fans also go to Sens games and have been traumatized by the shitty traffic out at the Canadian Tire Centre, but there’s simply no excuse to leave a CFL game at Lansdowne Park early. First off it’s the CFL, and as it’s been proven time and time again no lead is safe. Secondly, getting in and out of Lansdowne is much faster and smoother than leaving the CTC, simply because it’s in the heart of the city. If you paid for a ticket stay until the end of the damn game! – end rant

*All images via CFL.ca, the Ottawa Sun and the Ottawaredblacks.com

One thought on “REDPLAIDS vs Stamps; Different Jersey, Same Result”