As we await the launch of the Redblacks’ new Adidas-designed uniforms, we thought this would be a great opportunity to “look ahead” to what Ottawa’s first throwback uniforms might look like. With 120 years of Rough Rider football to draw from, there are definitely some great options to consider. In this short series, we’ll look at which year (or timeframe) we’d like to see remembered and why. Huge thanks to artist and CFL fan Nelson Hackewich for the concepts.


Back in the 1958, the Ottawa Rough Riders selected a smart and talented defensive halfback from McMaster University with the sixth overall pick. A Rhodes scholarship nominee and mathematics graduate, Russell Stanley Jackson made the decision to instead pursue football and went on to become one of the greatest quarterbacks in CFL history. In a 12-year career, Jackson brought three Grey Cups, three Most Outstanding Player and four Most Outstanding Canadian Awards to Ottawa. Jackson was inducted into the Canadian Football Hall of Fame in 1973.

As mentioned, Jackson was drafted as a DB. If not for injuries to incumbent American QBs (like today, CFL teams were disincentivized from starting Canadians at the position), Jackson may never have had a legitimate opportunity under centre.


Getting back to the uniform specifically, seems the Rough Riders wore them from roughly 1958 through 1960 (haven’t been able to confirm — any help appreciated!). They fared pretty well in them, too: 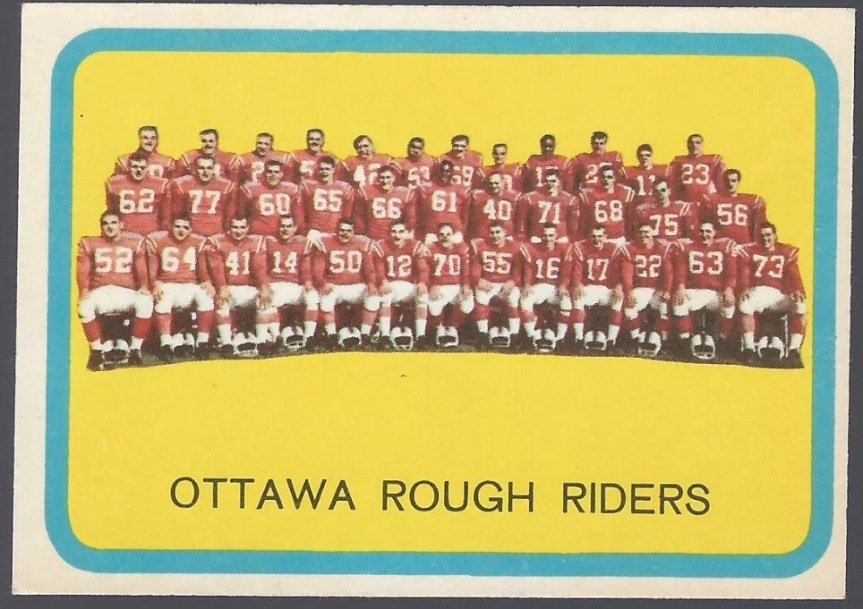 Ottawa would see greater success in the back-half of the 1960s, but let’s talk about that some other time 😉


The helmets from this era were also fantastic in their simplicity, featuring just the player number.
Nothing beats the R, but the old-school look with player numbers on the helmet is a close second.

Becoming a bit of a broken record here, but this is yet another sharp, simple uniform that would work today just as it did in the 50s & 60s. The fact it also represents the beginning of the Russ Jackson era is a huge bonus.